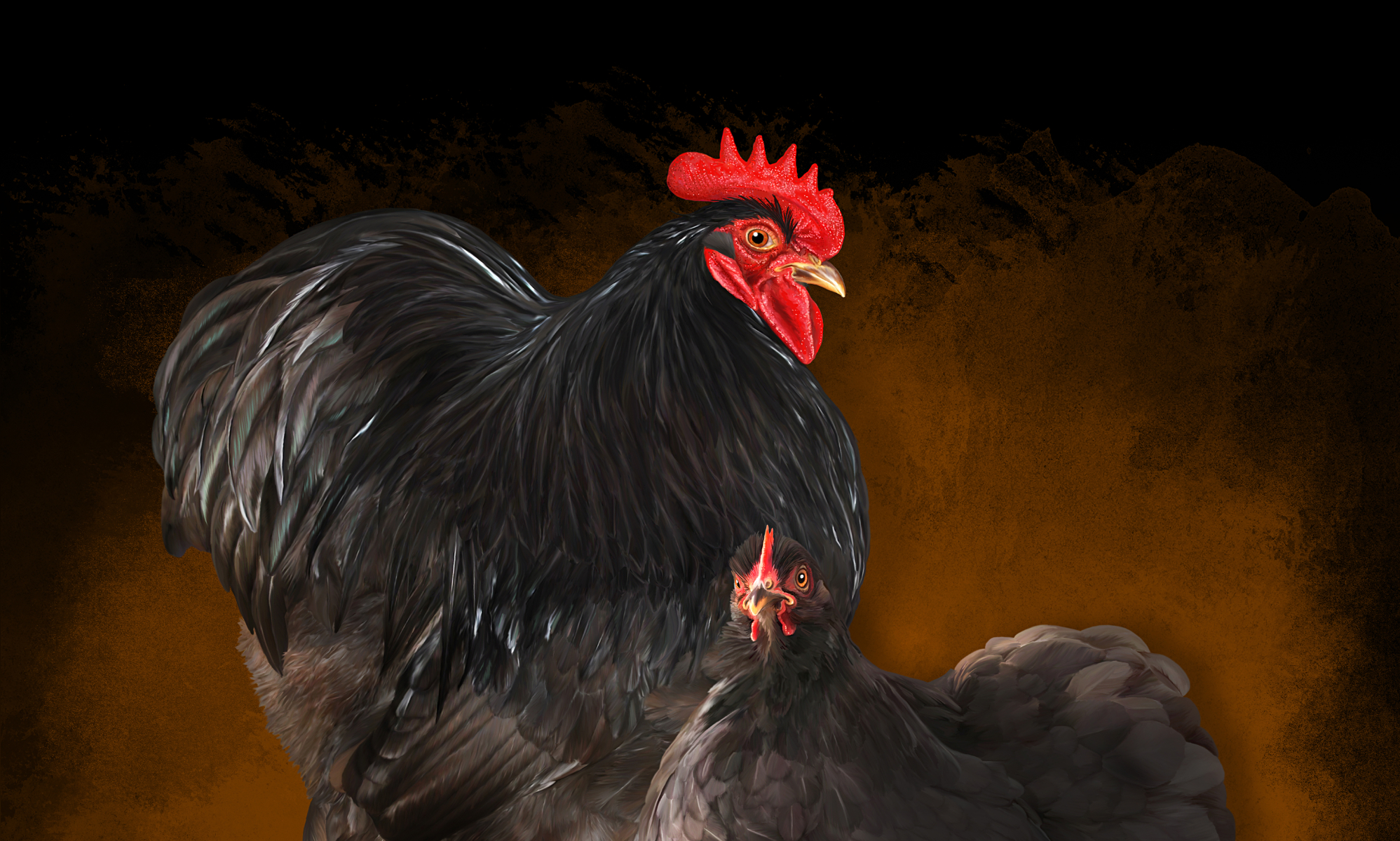 A page with PDFs of separate articles, free to read, written for those who are familiar with chicken genetics as explained in the books
All materials have © copyright, for use contact me.

The mock-up illustration of the Tollbunte Wyandotte from 2008.

On request of several, below the recipe for creating Tollbunte Wyandottes.
Meanwhile they are already existing.

Year 1: (red)mille fleur x gold laced, sex doesn’t matter because these patterns are autosomal, the same on both sexes. Amount of animals: see for yourself, they are all carrying mottled but the other genes are impure. Red mille fleur on Wyandottes is ‘random, which means its only the action of mottled which causes the flower (red, black, white). It’s possible they carry columbian, but that’s only usefull. F1 will be impure of e-allele, because you are crossing wheaten (eWh) x Asiatic partridge (eb). Chicks will have different down colours, document this. Light chicks have eWh, striped eb.

Year 2: F1 (offspring of year 1) cross to eachother (inbreeding), at the end of the Summer, select the ones with the best mottles, e.g. a cockerel and a pullet. Because of impurity of e-allele, the chicks will look different (pure wheatens, pure asiac partridges, mixes). The wheaten chicks will be yellow with a vague shade of red on the back, the asiatic partridges will have chipmunk stripes and the mixes vague stripes and some can have a dark head spot (columbian gene).

Attention: impure (Mo+/mo) mottleds can show mottling in their youth feathers, esp. the cockerels. Therefore wait till the end of the Summer, when they’ve moulted fully to adult plumage. After moult the white feathertips may disappear. The amount of animals: quite some, statistically 50% carries mottled 25% is mottled and 25% zero mottled, based on 100 chicks. Nature not always follows statistics.

Year 3: F1 from year 2 with mottling x gold laced. Offspring won’t be mottled, but does carry it. See Attention above.

The other way in year 3: Inbreed F1 from year 2, this can result in a pretty nice single lace. This F2 has variable mottling. Sometimes you can create something looking pretty much Tollbunt. This F2 is mottled in a certain way, it can vary in intensity and distribution. Sometimes with a bit of selection its possible to have a Tollbunte but the base is very narrow. You can breed two lines from the start (reciprocal, swap male and female) and mix them at this point.

Year 4: F1 from year 3, inbreeding, at the end of the Summer select birds with best mottling and lacing. Technically, laced should be pure now as well as mottled. The Tollbunte Wyandotte could be a fact, although a rough one, the picture is a painting over a photo: this is not reality!

PS.
For the ground colour: in red millefleur there is mahogany, this is persistent. When you want a gold ground colour, you’ve to breed a lot and select the least red birds, it will take some time before you get rid of Mh. Another way is breed back to gold laced every time, and not select them earlier than the age of 1,5 years, when their hormones are in full swing. Hormones influence colour: red in males, black in females.

The chickencolours E-zine with four articles.

What Wattles is about the wattles of Silkies. They should have a strawberry comb, which doesn’t exist, it is a visual description of shape only. The non-bearded Silkies should have wattles. Why do a lot of non-bearded have no wattles? And do judges pay attention to it?
There is a relationship between comb type and wattles…

Something both fanciers and veterinarians don’t know. It started in 2010 in Holland in some private flocks. CAV is part of the standard vaccination program of industrial poultry. How it jumped into backyard chook is still unknown.

An older article from the time dun and chocolate were not quite understood. This is a separate one on dun colour where it is compared to the action of blue and how it works in a comparative way.

The obscure history of the blue American Serama
Story about borrowing a gene from another breed. Creative breeding, the definition of ‘breed’ is ony determined by selection. You can make a Serama from a Brahma. When it looks and breeds as a Serama, it is a Serama.
That is one of the blessings of domestic chickens, they are all the same, just different looks.

Dominant white chickens are the sweetest
That is the message of the article since the causative gene of dominant white has a by-effect on behaviour which will please you and other chickens.

Old article on pigment holes in paint Silkies. Dominant white hits holes in skin melanisation. It is part of the gene, yet if you only breed with birds without holes, it seems to become less. Because it is part of the gene, I ask for tolerance. I thought it would be something similar as B (cuckoo/barred) and skin melanisation, demanding dark skinned cuckoo Silkie is a dead end road too. Anyway, holes continue to be seen, even after 10+ years.

An update on paint Silkie experiences and documenting them. In origin it was a dutch article, one of the last since I don’t write dutch anymore.
The experiences are not ‘science’, they are personal observations.

Chocoholics
An article from 2008 updated in 2014. Since it is about plain explanations it is still actual. For the ones who need a simple explanation to read. In 2008 not many chocs were around. I just discovered choc in Serama, the only known other chicken was the Orpington bantam in the UK, carrying recessive sex linked choc. From Serama it went into Silkie and Chabo in my breeding. Many breeders of bantams came to visit for a choc Serama to put in their favourite breed. The rest is known.

Choco Chabos (Japanese bantams)
Another 2008 article, based on an article in the Polish magazine Woliera from Staniszlav Roszkovzki. It was coincidence, while the first eggs of choc Serama x Chabo were in the incubator this magazine arrived by the mail. It took quite some effort to translate polish, to incorporate what was written in this article. Meanwhile the choc Chabos (Japanese bantams) are accepted in Germany in February 2020..

Sniffing the sex of the embryo
In 2015 an article was published in a science magazine on the ‘exhaust’ fumes of hatching eggs by the embryo. This sparked the idea to write this article.
Explained is how the researchers sniffed out the male and female embryos. Today (11-2019) there is still no commercial application of this finding. But that doesn’t matter. Several countries want to ban the shredding of male chicks just after hatch. Maybe one day there will be a solution.

Gene for Cr (crest) located, January 2021. Article on the findings on the crest gene and its three alleles found in specific ornamental breeds. Mentioned Silkie, Houdan, Polish, Padua etc. and white Leghorn as wild-type cr+.
Article is four pages and written as easy as possible.

Talking about undercolour (of reds)
Sept 2022. Why does one red chicken have a black under colour and another buff? As an example two chickens were used at a show in Hannover. This article explains why there is this difference in undercolour..

eb Asiatic ‘wildtype’ partridge
Sept 2022. The breast of an eb hen without lacings is eb pg+. Her breast is just as peppered/stippled with black pigment as the rest of her body.
We are not really used to this colour variety, it is rare. We are used to partridge and silver pencilled (dark). Here more on this basic colour.

Multiplex Freak Combs
Sept 2022. An article based on a 1946 paper of Taylor who created multiplex combs. Nightmarish headgear is the result. You can do this too at home 😎
He crossed single x rose comb. Some modern examples of my chickens too.
You get this when you create new colours and have to mix breeds.

Who coloured neatly between the lines?
Sept 2022. A strange phenomenon seen in blues, a little dark border around the blue part of the feather, either single laced or a partridge variety (multiple laced). The reason is unknown. A guess… One page article.

On red blue (double) laced, who coloured neatly between the lines too?
Sept 2022. This page belongs to the silver blue-laced Wyandotte (above here). She has fine black-blue lines between the silver ground colour and blue lacing. The same happens when the ground colour is gold. Here with mahogany (Mh) on blue double laced.
One page article.

Autosomal red – once again…
Sept 2022. Autosomal red, a blessing and a curse. Some more on it and the difference between split S/s+ cocks and autosomal red or ‘rust’ in hens. A few examples, not a solution to get rid of it. 4 pages, lots of photos.

Sex-linked dilution the other allele of Barred/Cuckoo.
Sept 2022. The B gene has 3 alleles, not counting absence of B. To what extent do these alleles of B occur in our hobby chickens? That’s speculated about in this article and also how the alleles look and how ‘it works’ based on a previously published academic study.